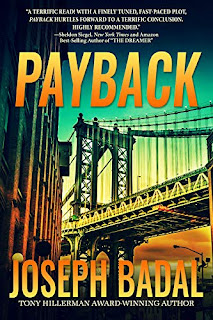 Joseph Badal's latest book, Payback. It's a standalone not part of his pervious series of books. I tend to like his standalones better than the later books in a series, that applies to all authors not just Badal.

In Payback Bruno Padace is a partner in an investment firm in 2008. He finds out from his secretary, who's having an affair with a senior partner that he's being set up to take the fall as everything is about to hit the fan for Wall Street.
Bruno grabs as many documents as he can get and bonds then disappears.
Ten years later one of the bonds he's stolen is cashed in California. Sy Rosen, one of the senior partners learns of the transaction and has a PI/hit man go after Bruno.
The plot of the story takes a number of twists and turns at this point. Janet Jenkins, who works at a battered women's shelter and is upset coming from a hospital where a woman was nearly beaten to death, but will return to her abusive husband and she can't do anything about it.
She sees a homeless man clutching a battered briefcase as two thugs try to steal it. She chases them off and checks on the man to see if he's okay. Bruno follows her to her work and a few days later he meets with her at work and asks about her work. He devises a way to cash in all the bonds he still has and turns the money over to St. Anne's so they can expand their program.
The PI/hitman then follows Forsythe, the broker who cashed out the bonds and blackmails Forsythe into setting Bruno up. I'm leaving a few things out here, but Janet drives Bruno to meet Forsythe where the hitman kills Forsythe and shoots Bruno. Janet drives into the hitman pinning him against a car. Forsythe dies, but Bruno survives.
Forsythe was an alias for Carlo Massarino, of the Massarino crime family in New York. He and Bruno had grown up on the same block, went to high school and Harvard together. Carlo changed his name and moved to California to get away from the family business.
This is the set up for the Payback. Normally I don't that in-depth, but without that background what happens next wouldn't make sense.
Bruno goes back to New York and meets with Carlo's younger brother, Louis, who took over the family business. He claims he's gone legit as RICO had shut down most of the illegal business.
They devise a plan to make Sy Rosen and his partners pay for their sins. Bruno has a tough time convincing Louis to set them up financially and ruin them instead of just killing them.
Rosen meanwhile hires a professional hitter to find Bruno. The PI/hitman in is linked back to their investment firm and the DA in California is filing criminal charges for the murder of Carlo and attempted murder of Bruno. Rosen now wants Jenkins killed as well.
The suspense builds from this point on keeping the reader guessing. Janet flies to New York to be with Bruno and the DA sends two detectives to follow her so they can give Bruno a subpoena. At this point you have two detectives, a hitter, a mob boss with his crew and Bruno running a scam as Janet acts as a magnet bringing them all together.
Joseph Badal knows how to tell a remarkable tale that keeps the reader guessing the whole way.
I have one quibble. The whole action is started by Bruno cashing in that first bond that sets Rosen on his trail. It is never explained why after ten years of hiding out on the streets he cashes it in. An explanation would make the story have more sense.

Thanks for stopping by! And, you're right about psychopaths... but where would fiction be without the villains?