Welcome to another TTT! What’s a book hangover, you ask? Well. Urban Dictionary provides us with two definitions that I think fit perfectly.

Books that trapped me in their world and I didn't want to leave.

Shogun by James Clavell. I'd seen it in bookstores for awhile and was intrigued, but was busy at the time devouring everything I could find of Harlan Ellison. When word got out there was going to be a mini-series on the book. I finally bought it. I then read everything I could get of Clavell's: King Rat, Tai Pan, Gai Jin, Noble House, Whirlwind. He is a fantastic writer. The mini-series with Richard Chamberlain I've watched innumerable times. The mini-series of Noble House with Pierce Brosnan is pretty good. The movie Tai Pan with Brian Brown is an abomination.

2. Dragon Riders of Pern by Anne McCaffrey. What a world to get lost in! For the life of me with all the movies and TV shows that have realistic dragons, I don't know why this series has been overlooked.

3. Harper Hall of Pern by Anne McCaffrey. Same world of Pern, but without dragons. Menolly becomes and outcast and is living in a cave when fire lizards start hatching and  are dying as they leave the cave. She impresses (becomes telepathically linked) nine of them keeping them alive. Ever since I've read the first of these books I want a fire lizard!

4. Middle Earth. The Hobbit, LOTR, Silmarillion. Tolkien's world is something to get lost in and never want to come back. 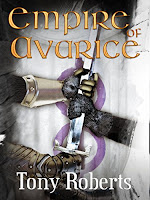 5. Empire of Avarice, by Tony Roberts. The Byzantine Empire explained on an alien planet. The first of now five books in the Kastania series and I've read them three times. Waiting impatiently for the next one. I'm doing the same for the author's fantasy about a Black Elf in his Blade series and punk rock singer in his Siren series. Once you read Tony Roberts you're hooked.

6. Six of Crows by Leigh Bardugo. This one was mentioned many times on TTT and Wednesday Challenge, out of curiosity I bought a copy even sprang for the audio. This is not a world I would want to live in, a little too dystopian for me, but when your done with both books you can't get it out of your mind.

7. Casca the Eternal Mercenary by Barry Sadler continued by Tony Roberts. Roman soldier who pierced Christ's side and became immortal. I used the first 22 of the books to get my 7th and 8th grade boys to actually read a book all the way through, and they came back for the next ones. The first 22 I got on audio tape as a free download, not available anymore, sadly. When I have trouble sleeping I'll choose one and listen. If I go to sleep, when I wake up I know exactly where I am and go on from there.
I was pleased when Tony Roberts picked up the franchise, and it's from his books in this series that got me hooked on his other writings mentioned above. Three of the Casca books are set in the Byzantine Empire and Roberts knows his stuff on that.

8. Soul Catcher by Frank Herbert. I did read a number of his Dune books, but none of them grabbed me by the throat and sucked the literary life out of me like Soul Catcher. I loaned this book to a wonderful lady I taught next to way back in the day. She gave it back to me and said, "What kind of book is this?"
It has that affect on just about everyone who's read it. You can't get it out of your head. 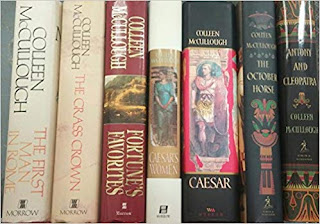 9. The First Man in Rome by Collen McCullagh. Rome has fascinated me my whole life. I thought I knew just about everything there was about it. Even wrote a 52 page play as a directed study project in college on the First Triumvirate. I got this first book and wisely read the glossary at the back before reading the book and discovered I didn't know a damn thing about Rome.
The series starts with rise of Marius and ends with the defeat of Anthony and establishing of the Empire by Octavian. It's an Herculean feat to get though all of them once, but I've done it twice. Rome truly comes alive in McCullagh's fictionalized history. (FH doesn't have imaginary characters. Every person mentioned in these books actually lived and are part of the history.)

10. The Fifth Element, directed by Luc Besson. This one is a movie with Bruce Willis and Milla Jovavich. If you want to get lost in a movie and never want to leave that world this is the one for you. My all time favorite escape movie. If I've had a meat grinder of a week on Friday nights when wife gets home all I have to say is, "Big Badda Boom."
We fix popcorn and plop down on the couch and let all the crap fly away into another universe.

Oh, The Hobbit is a great choice for this prompt! Yeah, that's a world that's really hard to say goodbye to.

Absolutely yes to Middle Earth! The world of LOTR is so rich and captivating.

Oh wow, Shogun's a blast from the past, I remember devouring it in far less time than reasonable when I was in highschool

Six of Crows is a hard world to leave. It's such a great story and world.

It's been with me since almost all my life, Lydia.

Lisa they really are. The LOTR movies were sooooo good and the Hobbit movies are sooooo bad.

Dianthaa, Shogun had so much in it. Glad you remember it too.

Deanna, not so much the setting as the characters who overcome it.

I'm with you on the Six of Crows and The Fifth Element!

I bet Six of Crows sounded awesome on audio!

I really enjoyed Six of Crows, too! I'm not sure I'd want to live there, either, but it was a fun world to visit, at least. Do you plan on watching the show when it's released?

Six Of Crows sounds so interesting!

Donna it is. I've found a couple of books recommended by this group not my cup of tea, but this one I've really liked.

I absolutely love the Pern books! I haven't read them all and I kind of want to pick the series back up so I can finish it.

Totally agree about Six of Crows, it's actually never left my head after reading it! Great list.

Kerri, they are wonderful.

Glad we agree on it, Sabrina

I'm totally with you on The Hobbit and The Fifth Element! I need to rewatch that soon.