Review: When We Believed in Mermaids 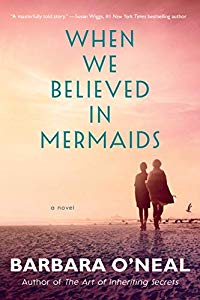 Warning this is a three hankie story. It’s told by two sisters both in first person. The basic plot is that Kit and her mother see Josie on a news cast from New Zealand where there was a nightclub fire. They believed her dead. The mother convinces Kit to travel from California to Auckland to find out if she’s really alive.


Josie was on a train in France that was bombed by a terrorist and somehow survives. She’s lived a fast life as an alcoholic and drug user and takes the opportunity to reinvent herself as someone else. She gets married and raises a family.


Kit travels to New Zealand, but before she starts her search gets involved with what she thinks is a vacation romance. There’s lots of steamy sex, but Kit has closed herself off from love. Javier is from Spain and falls head over heels for Kit. He gets her to open up about her past life and why she’s trying to find her sister.


Each episode of Kit and Josie telling their tales consists of flashbacks to their growing up and the multiple tragedies which led to Josie becoming a wild child and Kit focusing on education and becoming a doctor. The one constant is surfing.


The back story of their lives is slowly and agonizing drawn out to the bitter end. When the sisters finally meet there are consequences for Josie with her husband and the anger of Kit for making her think she’s been dead for 14 years.


The reconciliation between all parties leads to some painful and weepy moments.


It’s well written, the first person helps keep the story flowing, the one pitfall here is that each sister’s voice is too similar. They are going over the same history, but different first persons needs distinctive voices and these aren’t that much different in tone and temperament.