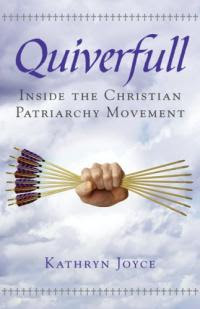 Wade Burleson is theologically much more conservative than I. He was for awhile on a number of the SBC boards. He also blogs and he wrote about problems within the leadership. For which he was treated like any other heretic.
This past summer when we went to the Building Bridges Seminar in Norman, Ok we had the pleasure of hearing him speak. He has an interesting review of this book. You can read his post by clicking here.
Kathryn Joyce and Wade agrees with her assessment that at the root of this movement is patriarchy. The insistence that the man should lead or rule the household and women are to be subservient. In colloquial terms: women should be barefoot and pregnant.
I would take their assessment one step further. The root of all fundamentalism whatever the religion or denomination is patriarchy. When the culture and religion see eye to eye on this there is little tension, but when the secular aspects of society start letting women off the farm, out of the sweatshop, released from brothels, or liberated from the raising children and cleaning house all hell breaks loose.
It's not necessarily men who are at the forefront of keeping women "in their place." There are plenty of women who find not bondage but security raising children and making the man who provides this comfortable and happy. It was women that led the charge to defeat the equal rights amendment. It is women who are vocal against Roe V. Wade. Sarah Palin is not alone in resisting social and economic progress for women (other than herself of course, she's exceptional).
The fundamental takeover of the SBC had at its base two issues: The literal interpretation of the Bible and the women being subject to their husbands. In the year of our Lord 2000 they rewrote the Faith and Mission Statement to include those two anti-Baptist, anti-spiritual, anti-intelligent clauses. It's a totally oxymoronic statement now. In one section they kept the core belief of all Baptists: That baptism is only a symbolic representation of the death, burial and resurrection of Jesus, but the Bible must be interpreted literally. Maybe it only makes the SBC Bipolar?
The statement about women being subject to the man is a case of reading only half of the thought expressed by the Apostle Paul. The other half is that man is to love and honor the woman, not treat her as a piece of property. She's to help a man meet (help meet) the difficult task of surviving in a hostile world. That would in my view make woman and man partners.
All relationships have a dominant and submissive. Twins, siblings, friends, and married hetero couples and gay couples always settle on who will be alpha and beta. This is determined by force of personality and mutual agreement usually after a test of wills. The stronger the personalities the longer and more tempestuous the test of wills. To replace a natural selection process (most communal animals have this selection process) with an artificial, arbitrary and mandatory system is ludicrous. It's a practice and belief sure to make both partners in a marriage miserable. To say this is God's will is pure blasphemy. Jesus came to give life, not misery.
As the two writers mentioned above point out: taking Quiverfull to it's logical conclusion leads to a hell on earth.
Posted by P M Prescott at 8:43 PM