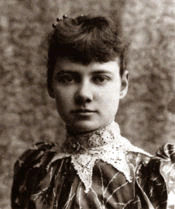 March is Women's History month.
There are many notable women to remember. Last week at Southwest Writer's Workshop Shirley Raye Redmond, author of numerous children's books and magazine articles, gave an interesting speech about Nellie Bly. I thought I'd pass along some of the fascinating adventures and accomplishments of this remarkable woman Ms Redmond spoke about.
She was born Elizabeth Jane Chochran in 1864. Choosing journalism as her profession she picked the name Nellie Bly from a Stephen Foster song.
At age 21 she spent half a year in Mexico writing on the conditions there under the dictatorship of Profirio Dias for the Pittsburgh Dispatch. Threatened with imprisonment for her articles she was forced to return to the U.S. Her articles were later released in a book entitled Six Months In Mexico. Leaving Pittsburgh she went to write for Joseph Pulitzer and the New York World.
Most people remember Hearst for his editorials that led to the Spanish American War, or perhaps the fictionalized version of his life in the movie Citizen Cane. He started what is called "Stunt Journalism" and Nellie did some memorable stunts for him.
The first one was to spend ten days in an insane assylum. Her articles shocked her readers and started improving conditions in these institutions. Ten Days in a Mad House is a compilation of those articles. After reading Jules Verne's Around the World in 80 Days. She talked Hearst into letting her try to do it even faster. The clincher was telling him she'd only take one bag for the entire trip. (No heavy trunks costing a fortune is luggage fees or porters to escort her) When she reached London news came that another woman, Elizabeth Bisland, was traveling in the opposite direction for Cosmopolitan Magazine. In France she was greeted by Jules Verne, who wished her well (the excitement this contest was creating greatly increased the sales of his book).
On the trip she faced many hazards. What almost ruined it was coming into the U.S. from Asia. There was a two week mandatory quarantine. The captain of the ship, who had done everything possible to get her from Japan to San Francisco in record time, talked the doctor into doing a quick exam (he made her stick out her tongue) and let her get off the ship. New Mexico nearly killed her. A bridge near Gallup was under construction. They'd just taken all the pins holding the rails down when the train went over it at full steam. The bridge held just long enough for her train to reach the other side before collapsing.
She beat the other reporter arriving from the 24,000+ mile trip in 72 days, 6 hours, 11 minutes and 14 seconds. Accomplishing this unchaperoned made her a role model for women's independence.
Nellie left journalism and married a wealthy industrialist 44 years her senior. In 1904 she invented, patented and started manufacturing the 55-gallon drum still in use. After her husband's death she was forced out of the business and returned to journalism, where she reported on WWI in the trenches on the Eastern Front. After the war she devoted her time to charitable organizations, mainly orphanages. She died of pneumonia in 1922 at age 57.
Wikipedia list these as her legacy:
Bly was the subject of a 1946 Broadway musical by Johnny Burke and Jimmy Van Heusen.[6] She was also the subject of a musical entitled "Stunt Girl" by Tony Nominee Peter Kellogg and David Friedman.
The Nellie Bly Amusement Park in Brooklyn, New York City, is named after her, taking as its theme Around the World in Eighty Days. The park recently reopened under new management.
Nellie Bly is a character in the computer video game Worlds of Ultima: Martian Dreams.
Nellie Bly was one of four journalists honored with a U.S postage stamp in a "Women in Journalism" set in 2002.[7]
She was the subject of a musical play performed at the Albany Civic Theater.
From early in the Twentieth Century until 1961, the Pennsylvania Railroad operated a parlor-car only express train between New York and Atlantic City that bore the name, "Nellie Bly."
Nellie Bly's investigation of the Blackwell's Island insane asylum is dramatized in the 4D experience shown in the Annenberg Theater at the new Newseum in Washington, DC, which opened in 2008.
The comics and other versions of the charecter of Lois Lane has Nellie Bly as her idol and role model for lady journalist.[citation needed]
Provides the hinge of a scene in which Abbey Bartlet declaims Bly's achievements to President Josiah Bartlet in The West Wing episode "And it's surely to their credit". [8]
Posted by P M Prescott at 6:11 PM

Glad you liked it.