Today's challenge is Which character from a book you like to meet. Okay, one male, one female. 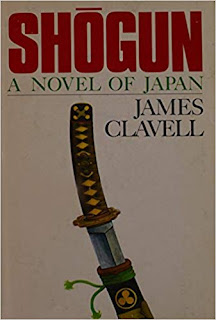 Captain-Pilate Blackthorne, or Anjin-San from Shogun.

Captain-Pilate Blackthorne lands in a hostile land, unable to speak the language, in a totally unfamiliar culture and by using his wits and knowledge he's able to not only survive but thrive. Alexis Carew is a young girl from a planet on the fringe of civilization. She joins the Navy as a mid-shipman when the top brass doesn't think a woman belongs in the Navy at all much less as an officer. She has to fight the insubordination of the crew as well as the misogyny of the commanders and still do her job, which she not only accomplishes, but is able to advance.
Posted by P M Prescott at 3:18 PM

I haven’t read either of these books, but both of these characters sound like they’d be very interesting to meet, indeed.

Those are very interesting choices, and I'm not familiar with either of them. But they both sound like fascinating people to meet!

I haven't read either of these, but I like the sound of Alexis Carew in particular.

Michael, Clavell was a popular author in the 70's and 80's. Richard Chamberlain was a great Anjin-san in the mini-series. You can get it on DVD and Blue Ray, or read the book.

Tanith, I've enjoyed all the Alexis Crew books, it's the era of sailing ships set in space.