Book Review: Echos of the Past 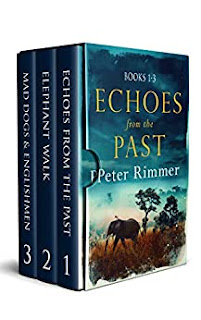 The beauty of Prime Unlimited. Three books considered as one on the rental list.

The Pirate, Archibald Brigandshaw, owner of a major British shipping line wants the Brigandshaw family line to join the aristocracy. His oldest son Arthur he arranges to marry a poor aristocrat with title and mansion. Sir Henry Mandeville is a widower with a sixteen-year-old daughter, Emily. When Arthur weds her, and she has a son then a Brigandshaw inherits the castle, mansion and title.

Sounds rather Bridgerton at this point.

The hitch is that the Pirate's youngest son, Sebastian and Emily are in love and let nature take its course.

The Pirate sends his son on one of his ships to Bombay with orders he can't return for 18 months.

When the ship docks in Cape Town, the captain of the ship takes pity on the young man and gets an elephant hunter, who supplies him with tusks, to take him under his wing and train him to kill elephants. This is how Africa becomes the focus of the books.

I'm on the second book Elephant Walk, which is the farm Sebastian creates in the Veld after he returns in the first book to kidnap Emily and his son Harry along with the nanny who marries Tinus Oosthuizen, the elephant hunter and sets up a farm next to Sebastian's.

The Pirate puts a price on Sebastian's head for kidnapping the heir to the title, even knowing the boy is not Arthur's son.

Sebastian gets arrested, as telegraph lines span the globe now, but is found not guilty when Emily testifies that Arthur never consummated the marriage preferring to live in London with his mistresses.

It gets complicated, but the historical facts are astounding.

You know Cecil Rhodes was one miserable son-of-bitch. He insisted on building a railroad line from Cape Town to Cairo, this extended British control through the Boer States. This led to the Boer wars.

The Krugerand is the South African gold coin named after Paul Kruger, the Prime Minister of the South African Republic. He refused to let the British settlers coming into their country have the right to vote, which led to the war.

When the war turned against them, he fled to Europe with the national treasury. He's the guy they glorify by naming the gold coin after him.

You want to know why the dog paddle style of swimming is used. When swimming across rivers in Africa, don't splash! There are crocodiles.

Toss in a native witch with a pet leopard that pushes for a war against the white men and a bloody conflict. Sebastian's older brother, Nathan, who is a missionary and visits his brother to condemn him for living in sin with his older brother's wife.

Tinus is a Boer and though he marries an English woman and lives in Rhodesia, he's a from a family line of Boers. He fights against the British.

Sebastian sits it out and is condemned as a coward, but he's out in the boonies, it doesn't matter to him.

Echos of the Past ends with Tinus being caught, tried and hung as a traitor, not as a prisoner of war, who would be shot.

He led a raid on the British headquarters, took the British general captive, stripped all the officers down to their underwear and sent them packing.

The British general was not amused.

Elephant Walk deals with Sebastian's son Harry, who is at Oxford when he learns his father, Sebastian, was killed by a rogue elephant and has to return to Africa, this is set in the early 1900's leading up to WWI.

The writing is informative, and I love all the varied characters in Africa and England.

These books are going to keep me busy for some time.

These sound good. I will check them out.

I've been enjoying them, maybe you will too.