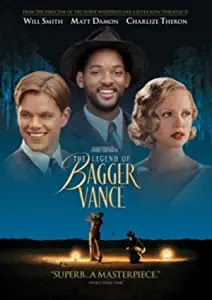 Hard to imagine it's been 24 years since this movie came out. It cost 80 million to make and earned 39 million. A bust for Mat Damon, Charlese Theron and He who shall not be named.

Of all the movies on golf, this is by far the best. It's more than about golf, As is often said, Golf is life. It's a game that can't be won only played, like life.

It's set during the Great Depression and Matt Damon is a local golf hero before WWI, he comes back damaged. The girl he left behind is spending all her money to save her father's golf course by holding a golf tournament with Bobby Jones and Walter Hagen, two of the best golfers alive. Junah is roped into playing in the tournament. Bagger Vance comes along to be his caddy and gets him back in mental shape to play.

The most important part of the movie is after Junah has a disastrous first round. Bagger tries to tell him a story about overcoming adversity. Junah doesn't want to hear it.

There's a little boy named Harley who is the one who talked Bagger into playing in the tournament and is a fore caddy. The boy's father used to own the hardware store until the depression and is now sweeping the streets and renting out a room in their house to strangers. He tells Junah how ashamed he is of his father and that his friends have too much pride to sweep streets.

Junah then berates him and says, his father paid back everyone who he owed money to instead of declaring bankruptcy like his friends' fathers. "Your father faced adversity and beat it back with a broom."

It's here he realizes what Bagger had been trying to tell him. He and Harley discuss golf and that it's only a game, that can't be won, only played.

That's all I'm saying about the movie. It's great and everyone should watch it. It's available on DVD and on Prime Video.

I confess, I'm not a golf fan, but with your recommendation, I will check this out.

You will enjoy it.