Isaac Asimov referred to one aspect of science fiction and the Frankenstein syndrome. That every new advance is met with horror and how by playing God all hell will break loose.
The new Frankenstein I've found it called Cryspr.

I downloaded two books the same day. One by the blockbuster author Dean Koontz and the other by someone I've never heard of before, Geffrey Cooper. I did not know they both used the same monster.
Both books were murder mysteries. Both books referred to something called Cryspr. I've set up a link here that explains what Cryspr is. 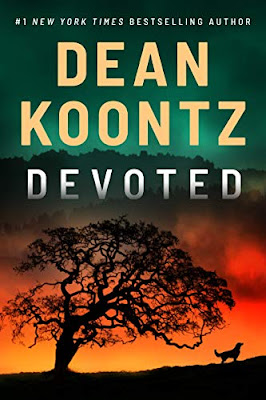 The Dean Koontz book Devoted, is about a laboratory that is trying to develop the ultimate human being. There's a leak of the genetic material and the Billionaire owner has the plant rigged to explode and burn all evidence along with the 93 people working there. Lee, the head of the project escapes. He's infected with the rogue genetic material, but he has an escape plan to leave the country and live off a hundred million dollars in Costa Rica. While he's fleeing his body starts mutating.
Enter stage left is a golden retriever named Kit, who is part of the doggy wire. He can communicate with other special dogs like him. He's even able to talk to his owner with a laser  pointer and alphabet on the wall. His owner dies and he is hearing someone on the wire and decides to find this new voice as it's different.
Enter stage right is an 11 year old autistic child who's never spoken, but reads at college level since he was 4. His mother is a widow, but lives in a well protected, fortified house. She worried about the people who murdered her husband.
Add one other person, Ben, to the mix with an ex-seal that teams up with Kit on the road to find Woody, the autistic boy and his mother, Megan. Got it so far?
Lee decides if he's going to live in Costa Rica he wants the one woman who was stolen from him by his friend, Megan.
Add in the billionaire who sends a hit squad to capture Megan and Woody.  From there is gets complicated. 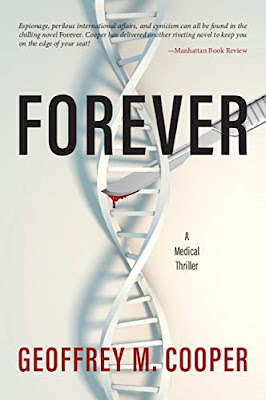 Forever also uses Cryspr, but in this case it's a Billionaire wanting immortality. He's murdering college students and having their bodies drained so he can have blood transfusions.
Ben's girlfriend is an FBI agent assigned to the murders. He's working in a lab working on getting certain antibodies spliced into cancer cells that renders them benign. The woman next to him in the lab is working on dog genes comparing grown genes from long lived dogs to shorter lived dogs.
A Billionaire sets both of the scientists up in his lab thinking that by combining the method of changing genes from cancer research and putting the genes for longevity together will make him immortal. That's the premise, but as far as I'm going here. 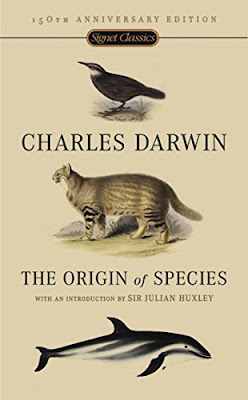 Now to my point. Since Charles Darwin published The Origen of Species. Evolution has been the basis of biology and most of science. It's been the boogey man for fundamentalists.
I've wrestled with evolution and belief in God all my life.
I accept God as Creator, and that he used evolution to make life here on this planet.
My synthesis of faith and science has developed over the decades down to Faith askes the question WHO. Science  the question HOW.
With my limited science knowledge I learned that 90% of all evolution is micro-evolution. This is the difference between a single specie. All the varieties of dogs, they're still dogs. Same with cats and even people.
Macro-evolution is change from one specie to becoming another. Mutation is the catch phrase as to how this happens. I've accepted that human beings developed from lesser specie through mutations over great periods of time.
I was never one to swallow the crap the God created the universe in 4004BC. Adding up all the number of years of the patriarch mentioned in the bible from Adam to Noah and dating when God created everything is so sisplistic, childish and down right stupid as there is causal relationship to those years and creation. 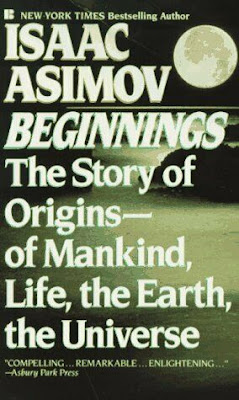 My understanding of how humans evolved from lesser specie came from Isaac Asimov's book Beginnins.
He explained it through the development of the human fetus. That in the various stages of development is the evolution of humanity. The fetus goes through all those stages even having a tail at one point.
What has been lacking in my understanding was how mutations happened that caused macro-evolution. The book Forever has my light bulb moment. Brad Parker is trying to do just that, mutate cancer cells to change them from virulent to benign. He's found different anti-bodies that when present over time can cause this and after identifying a few of the antibodies works to combine them to speed up the process.
Now this has explained to me how gene manipulation has its benefits and how a specie can evolve into a different specie. The mechanism, if true after all this is a novel, has answered my question of how God did it.
Now were back to man trying to becoming God and does that better our lives or create monsters.

Great post. Geof Cooper is a retired cancer researcher, and my understanding is that most of the techniques and methods he describes in the book are pretty accurate.

Dean Koontz is a good writer who writes good books but they leave me exhausted.

I've never had a problem with evolution. The genius of Darwin is that he described a process but didn't know the mechanism. I've seen lots of Fundamentalist twist and turns and create little rules for God such that he allows evolution only to a limited degree and would never allow a new species. That is putting God in a box as far as I am concerned.
I also don't think that that I don't need to understand everything. That is part of having faith maybe.

Yes, Yogi, if you know the answer, it's not faith.