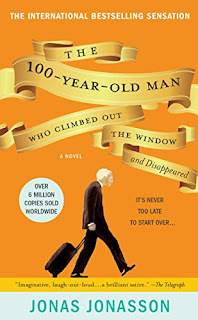 TTT and WC had a number of bloggers recommended The Hundred-Year-Old Man Who Climbed Out The Window and Disappeared by Jonas Jonasson.
The book starts off rather amusing. An old geezer on his 100th birthday decides to leave the nursing home and start walking. He makes it to the bus station with only fifty crowns. (The story is set it Sweden.)
A guy has a big suitcase and it won't fit into the bathroom and he has to go. He asks the old man to keep an eye on it for him and closes the door. His bus shows up so the old man named Allan takes the suitcase and heads out. The guy comes out of the bathroom and is not happy the suitcase is gone. He threatens the ticket seller into telling him where the bus is going and start chasing a hundred year old man and a suitcase with half a million in cash.
It's and improbable chase, but the author intersperses the chase with Allan's life story.
I was enjoying the story until it hit a snag for me. Allan is living in Los Alamos, NM when the atomic bomb is being developed. He figures out how to make it work and meets Vice President Truman. While they are having dinner Roosevelt dies and Truman becomes president. Screech, The rest of the book as his story unfolds he gives the Russians the bomb and there's a list of historical people starting with Truman, then Stalin Mao, Zedong, Churchill, De Gaul, Lyndon Johnson and so on. It all hinges on him figuring out that the fissionable material in an atomic bomb needs to be divided in half and smashed together to create critical mass.
This is one suspension of disbelief too far. There were two groups working on the bomb in Los Alamos. They knew from the start that the fissionable material needed to be smashed together. One developed a gun barrel approach the other group used an implosion technique. Not only that Truman didn't know about the Manhattan Project until he was president and they needed him to approve using it. He never visited Los Alamos. The book kind of fell apart for me at that point.
The tale of his wandering while 100 is worth reading and it is funny how the police, the prosecutor and the media start fixating on the story and blaming him for murdering three gangsters chasing the suitcase. How he talks his way out of prosecution after he's finally tracked down is priceless.

Sounds like an interesting book, but yeah, those historical inaccuracies would be annoying.

Yeah, Berthold. But it is what it is.