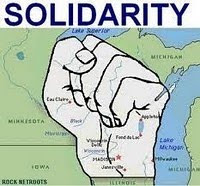 The wingnuts have bullied America for years. They've attacked the poor and the oppressed calling them wellfare queens and have gotten away with it because the poor don't vote. They've nearly killed all trade unions by sending those jobs overseas.
I could go on and on about what's happened for the last thirty years, but now they've stepped over the line.
Education has been under attack since 1986. They've badmouthed teachers and their unions (there are two AFT and NEA) and finally thought they could outlaw public employee unions. The last bastion of unionism left. Finally someone has decided to stand up and protest the impoverishment of America by our politicians and corporations.
The governor of Wisconsin wants to keep the unions from collective bargaining except for salaries claiming it's a way to ballance the budget. Collective bargaining on salaries is the only part of the negotiation process that impacts the budget. Benefits like health care and retirement are part and parcel to salaries and are taxed as such by the IRS. Other aspects of collective bargaining have to do with non budget items like hours, working conditions, grievance proceedures, hiring and firing, stuff like that. So why do they not want public employees, not just teachers, but state and city workers, firefighters and police, to negotiate these items. They want to hire and fire without due process. Mainly to fire anyone who belongs to the union.
Protesting in the streets will only do so much, but it is getting the attention of voters to see what's really happening and at the next election things might change, for a couple of years at least.
Posted by P M Prescott at 12:14 PM