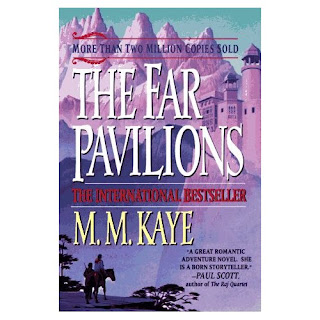 I thought I'd start a series of posts on my favorite books.
One of my all time favorite books is M.M. Kaye's The Far Pavilions.
I've read it at least four times, and I just love getting lost in the story. It's one of the greatest time machines anyone can get into by just opening a page. What really strikes you is how many words she uses in the native language that by context and explanation you begin to understand. You also get a sense of the culture clash between Hindu, Muslim and Christian values.
Set in India under the British Raj beginning with the Sepoy Mutiny and ending with the disastrous British incursion into Afghanistan. I read this book the year before the Soviet Union invaded Afghanistan and knew then it would be a huge mistake from the understanding this book provided. It would have been better if our political leaders had read this book too before sending our troops there.
Back to the book, it is divided into three parts and the author could have, if she'd wanted, turned it into a trilogy, but it's nice to only have to buy one book.
The first section is about Ashton Hillary Pelham-Martin from his birth, the tragedy of his family dying and being taken through most of India by his wet-nurse while the Sepoy Mutiny is taking place. They settle in a small kingdom where he comes to the attention of the Rajah and is moved into the palace as a companion to his son and heir. This part of the story gives a wonderful insight into palace intrigue.
The second part of the story is after Ashton has fled for his life from the palace, finds out about his true identity and goes back to England for an education, comes back to India a proper English gentleman, but knows how to blend in with the natives. He gets into some serious trouble by being a little too chummy with the natives and is given the job of escorting two princesses to their wedding as punishment. Escorting the entourage will get him out of his superior's hair for a year. While leading the procession he realizes that one of the princesses is from the palace where he grew up. This leads to the love story which is central to the story.
The last part of the book deals with the British invasion of Afghanistan and setting up  the doomed Residency in Kabul. From this point on the story follows historical facts very closely, and as far as I can deduce the writer's family members were involved in this tragedy.
That's a lot for one book. Palace intrigue, forbidden love, and war in an exotic location.
Side note: They did make a mini-series with Ben Cross and Amy Irving in 1984. They skipped the first part, rearranged the second and third parts and totally ruined the whole story. It's dreadful. Filmed in India it enraged the people there because of the kissing scenes, which as Richard Gere found out recently, is taboo.
Posted by P M Prescott at 8:10 AM

While I dislike and mistrust Vladimir Putin, he is said to have pulled President Bush aside and advised him to stay out of that area as the Russians lost 250,000 boys. Tragic region. I know of no solution.

It has always been an uncontrollable region and everyone who has tried to control it has failed.