First things first: Spent most of last evening putting Mom's kitchen hutch together. Quite a job, but it looks nice. I didn't have my drill with me to anchor it to the wall, which is what I will do tomorrow when we have dinner there. It's nice to have Mom here to fix her pot roast for special occasions. Spent most of the day today shopping for Grinnygranny. She found a cute tea pot in the shape of a cat holding flowers and an Elvis lamp. When she wasn't looking I bought her a pen and holder that looks like a Fararri shift assembly. She can put it on her desk at work and tell everyone I bought her a Fararri for Mother's day.
Michael Manning had a post about a dog named Brutus in his area horribly mistreated. I had to do a double take. The dog in that picture looks just like the dog we had my senior year in high school. My dog's name was Harvey. It brought back many fond memories. 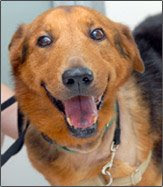 Brutus
The dog mentioned by Micheal Manning.
This is Harvey. It's the best picture I could find. I have better, but couldn't find them today. 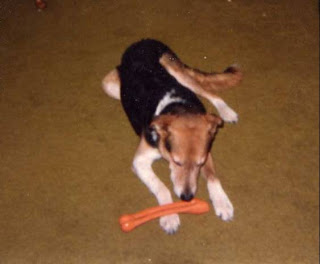 One of the female teachers that worked with Dad owned him first. He wouldn't let her boyfriend in the house, so she asked around if anyone wanted her dog. Dad brought him home even though we had two dogs already. Our other two dogs were Toy Fox Terriors, and Harvey's foot was bigger than both of them. I walked in from track practise, Dad met me at the door and shook my hand in order for him to accept me. He was trained to sit, lay down, stay, and guard to not let anyone in the house unless the owner shook hands. He was an extremely smart dog, and good judge of character. If he didn't like someone he would not let them in the house. The poor gal that gave him away made the biggest mistake of her life, and should have heeded Harvey's advice.
I wasn't too shure about Harvey at first. We'd alway had small dogs. Charlie and Cleo (the toy fox terriers) were my babies, and every time Harvey would sniff at Cleo, Charlie would go after him. Harvey would step on him to keep him from getting any closer, but didn't hurt Charlie. By the second day they had worked out the pecking order and they got long fine. In the picture you see Harvey's orange plastic bone. That dog loved to tug. He pick up a stick or article of clothing and would tug for hours. I had an old jacket with really baggy arms and I'd go out in the back yard and box with him. He'd come at me and I'd push him away. It didn't take long to have the sleeves of that coat in shreds. There were two parks by where we lived at that time and I'd put him on a leash and he'd run up to five miles with me staying stride for stride. We had to cross a busy street to get to the parks and the only I fear he ever showed was toward the traffic. He always made sure I was between him and the cars.
He hated the mailman, and crashed through the front window twice trying to get to the man. The second time he got maced I think he learned his lesson.
When I left for college and would call home he knew I was on the phone and would want to sit in Mom's lap, and he was not a lap dog. Whenever I'd get home from college the first thing I had to do was play tug and take him for a run. He was the happiest dog in the world when he saw me. Bruce was living at home before he got married, and his best friend would come by whenever they'd go out. Dave went into the backyard to knock on the back door so as not to bother Mom and Dad. Harvey met him at the gate and he decided from that point on to make real good friends with Harvey. I was surprised he lived to tell the tale.
Grinnygranny still gives me a hard time about him. When we were dating we started tickeling each other and he came after me. He was extra proctective of women, but still he was supposed to be MY dog.
Dad had to put him down the second year we were married. It hurts to this day. We've had many other dogs and I have two right now. We've loved them all, but none have matched Harvey.
Posted by P M Prescott at 5:19 PM