WC One day in my past.

Today's challenge is where I would spend one day in my past. 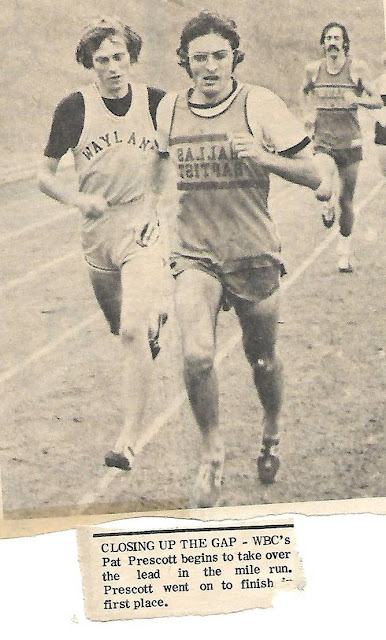 Picture is of the first NAIA Texoma conference championships in May 1974. The runner I was passing was from Australia running for Dallas Baptist. I beat him in the mile, and he lapped me in the three-mile.

Oooh a tough one.

There is one day that changed everything for me. I can't give the actual date, but here's what happened.

It was between nationals at the 1974 cross country championships, where I ran the race of my life, and the start of track season in February 1975.

I went out on an eight-mile run and felt good. Coming back to campus. I went up to the back door of the gym and found it was locked. I stupidly did an about face, like taught in my high school AFJROTC class. Something twisted in my right knee.

Also, stupidly I applied a heating pad to it when I got back to the dorm. A few years later sports doctors advised ice when a swelling injury occurs.

To train for the mile and three mile takes two or three days a week in long distance like an eight-mile run. Usually Monday and Wednesday, Tuesdays and Thursday for interval runs, 16 220's with a walk that distance between, 8 440's win a one lap walk or 4 880's with one lap walk. This is to keep speed up for the sprint at the end of the race.

What I found about my knee was that on intervals where I was running fast, I didn't feel anything. On over distance I had a nagging ache. Running that way was like water torture.

By the time the season started I was still in good condition, but in a month my conditioning was gone. My times and places suffered. The coach dropped me from the team.

I had been running track since 7th grade, earned a track scholarship and now junior year in college and it was all over.

Since then, I've seen pro football players injured the same way, they plant their foot and twist to change direction and they go down career over. Tony Dorsett did it in practice with the Denver Broncos, Bam Morris (Atlanta Falcons) did it on national TV against the Cowboys.

If could get in a time machine I'd tell the young fool, don't go to that door.

Then again, maybe I'd tell myself not to get married to my first wife in May of 1975.

Those are both very good answers!

Good choice. Goes to show how a small decision can totally change your life...

It's amazing how small things can change your life. This was drastic.

Yes, Berthold, they do.

Yogi, it was at the time.

Pat, you are a hoot! What do you think would've happened if you didn't injure yourself? More championships? The Olympics? Pictured on a box of Wheaties?

I agree with the marriage sentiment...I guess that's why hindsight is 20/20.

Laura, I wasn't Olympic caliber, but I'd have had a scholarship senior year instead of having to work and finish up.

Both good answers. And I can definitely understand the marriage one. I've had a few relationships I'd like to cancel.

LOL, Tanith. My second marriage is coming up on 44 years.