From the Wednesday blogger challenge I've discovered numerous authors plugging their books. I read some of them from time to time. If the story is not my cup of tea I'll not say anything. If I find one I like I'll post my thoughts. I prefer if the books are on KDP and free with Kindle Unlimited, but if the price isn't too high and it's around payday I'll spring for one if it catches my interest. 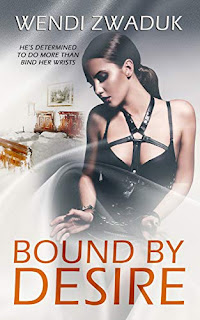 This book is similar to 50 Shades of Grey in that the sexuality is BDSM. An intelligent middle aged woman gets divorced. She's running her own business and explores a submissive role to one of her employees who is a few years younger. This is the flip side of Christian Grey.
Stella leaves her controlling husband who repeatedly cheats on her and meets Wes Chase. He works in her IT department, but since he wants to own his own Vinyl record store moonlights as an escort a women's establishment and Dominant at a BDSM club.
Wes fell in love with Stella when he tried to pitch his record store idea to James, her husband at the time. Stella like his idea and tried to talk James into investing in it, but her husband refused by heaping abuse about not interfering in his business. Stella then decides to divorce him.
At a celebration of her divorce Stella meets up with Wes at the night club where he's an escort. He safe since she works for him and pays for his services for the night to keep her friends from picking for her.
Stella's been invited to her ex-husband's wedding and she decides showing up with a hunk like Wes would be a kind of revenge. She asks Wes to be her escort and offers to pay him. Wes turns the tables on her by saying he'll go for free if in the three weeks leading up to the wedding they fall in love.
The romance begins with many pitfalls and lots of kinky sex.
Wes  has an ex-girlfriend that doesn't want to let him go and Stella's ex-husband tries to control her life and break them up to add a little conflict.
There is no one trying to kill them or stalk them as is the main source of conflict is many women's romance novels which is refreshing.
The erotica was well written and arousing without being repetitive or mechanical. Overall an enjoyable read.

This book probably isn't my cup of tea (unless you omitted something about spaceships and robots :) ) but I think it's awesome that you've discovered new authors this way!

Berthold You need to try the Wednesday challenge, maybe you'll come across a writer or two you like too.

I always tell myself I'll do it, and then I run out of time and realize my post will be too late. But I'll give it a try!