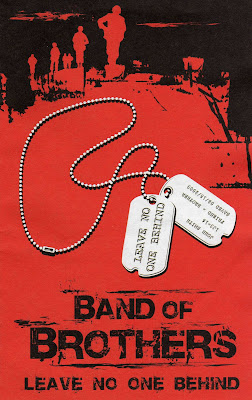 We went to a church today here on the west side. It started as an extension of the huge mega church in town across the river. We've been to the mother church many times over the years (usually for conferences that were hosted there) so we were naturally curious about this one.
Even though its not in the name this is a Baptist church.
We were the only ones that brought a Bible. They weren't needed. Grinnygranny admonished me to keep an open mind as we sat down in the fairly plush chairs.
Here's what my open mind noticed:

The picture at left is the cover of their order of worship. It was also plastered all over the walls. It is the focus of the series of the pastor's sermons. When I saw this I reminded this was one of the churches that showed the video Bush: God's Warrior. I also equate this with the crazies taking guns where Obama shows up to speak. Those who would applaud a gunman murdering a doctor in a church because what he does offends their religious beliefs. The symbolism of militancy is overt not subliminal. It brought to mind Barry Sadler's book Casca: The Samurai. Casca sees monks wearing swords. He thinks to himself that of all the centuries he'd lived that whenever religion picks up arms the world is in a pile of shit.

Another observation is that everything this chuch does is packaged like either a television show or movie.

Church has always been about entertainment. For much of history it was about the only form of entertainment the average person had to break up their work week. The last century brought cheap entertainment to the masses. Movies, television, radios, lp's 45's, tapes, CD's and now MP3 players, Ipods, PC's (the flood continues) fought with church for the attention of the masses. Some embraced the new medium. Billy Graham brought the local church service to the world with his telecasts. Radio and televangelists quickly found out there was gold in them thar little old ladies until the shopping networks cut into their profits. In the last fifty years church attendance has been way down and this seems to be one response. If you can't beat 'em -- join 'em. If anyone can find a way to add a video game to the sermon I'm sure they'll include that too.

Re: Casca, there's also a certain amount of ambiguity about who is responsible for conversion by the sword.

The European "Saint/Kings" (Louis, Edward, Stephen) won canonization by killing off the theological opposition and "converting" their nations to Catholicism...Which didn;t alawys work out for the wrongly-believing...

There's one other historical reality that Dubbya shares with all the saintly kings of Europe. Everything they touched turned to crap too.

PM: Sounds like a bad dream. I'd stay away. No, I don't like guns at all. I'm sorry to read you both wandered into this crazed place. May you find a nice church to attend that is sane.

This was a one time visit just to see what it's like. This church is just down the hill from the one we attend.