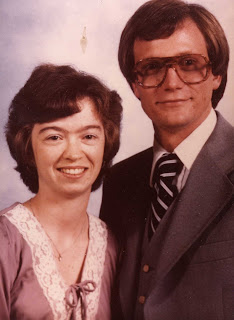 Thirty years ago I was a drowning man coming to the top of the water and taking a breath of air. The proud preacher boy with his loving wife going off to seminary had crashed and burned. The marriage was over, clerical career a thing of the past and I started to pick up the pieces of my life to start over. After working as a door to door salesman selling fire alarms, in the Sears automotive department, Asst. Sporting goods flunk--eerr manager at a Woolco, and driving a dump truck for a high school buddy with a backhoe service; the divorce was final and I needed to get on with my life. I felt my choices were to enlist in the military (no wars looming on the horizon) or get certified to teach. Two years of high school ROTC taught me the last thing I wanted to do was sign my life away to any branch of the armed forces. So I got a job substitute teaching during the days and working as a security guard in the evenings. In three months I had paid off my credit cards and I was starting to sock some money away for the fall semester at UNM. Then one Wednesday after I came home from subbing and had a day off from standing out in front of a grocery store watching picketers wearing while a fake police uniform, I was looking forward to catching up on some sleep. BTW I was living at home, when I walked in Mom asked if I wanted to go out to dinner. A real no brainer of a question. After eating Dad then drove to church for prayer meeting. I've always maintained that they kidnapped me so I'd be there that night.
At prayer meeting it was announced that there would be a singles retreat in a few weeks in Glorieta. Since I was now single and the church where I had been Baptized and liscenced to preach was getting a pretty sizable unmarried and recently divorced population. I figured I could get off from my security job for that weekend so I signed up.
When the weekend came on the Friday night we drove up I knew most of the group and was having a pretty good time. The one thing I still remember that night was getting in my sleeping bag on top of a twin bed and needing to turn out the light, so I hopped up still in the sleeping bag, hopped over to the light switch which turned the room pitch black, I hopped over to what I thought was the bed and hopped right onto the floor. So much for being Mr. Cool.
Saturday morning while we were eating breakfast a few others of the group showed up that couldn't come the night before. This lovely girl walked in that everyone else seemed to know, but I didn't. A little later I introduced myself to her and as the saying goes the rest is history. We went out on a hike with the group, but by Saturday afternoon it had pretty much paired up as the lady heading the class intended. That weekend resulted in at least five marriages within a year. Grinnygranny and I got to know a little about each other and Sunday I asked her if she would like to go out on a date the next weekend. Two weeks later the church I was attending (I had been youth director there a couple of summers earlier and the pastor of that church was helping put me back together) was having a revival. I asked her if she would like to go to the revival with me and we went every day for a week, singing in the choir together.
Six months later we were married in that little church -- it's not a little church anymore and the sanctuary where we were married is now a sunday school class. The church that had the singles group's pastor let everyone know in no uncertain terms that he would not marry anyone who was divorced.
Still it's hard to imagine that I've known Grinnygranny for thirty years now, and what a life we have made together.
Posted by P M Prescott at 2:36 PM

What a lovely story!

Happy anniversary, and here's to many more years of you living happily together!

Good Morning, P M: THis blog is a testament to anyone who has suffered hardships and climbed back to the mountain top to reclaim their humanity and resume life to the fullest! I respect your tenacity and courage!!!

The anniversary part is only in our meeting. We were married in November.