Mom's moved in. They got in Tuesday night, unloaded the truck Wednesday and yesterday Auntypesty and Mom started the unpacking. Grinnygranny is off today and is going over to help.
Last night APS held a dinner for all 25 year teachers. It was nice, met some friends that I taught with at other schools and was surprised there were two others from my school there as well. We were all given a piece of Nambe ware. Something I've always wanted, but found a little too expensive. It's a candle holder for one of the big round candles. I haven't figured out where to put it yet, but it is nice to have. 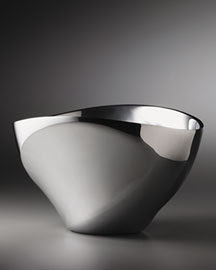 I'm feeling rather validated today. In February when it came time to vote in our caucus I wrote a post explaining why I was voting for Hillary Clinton over Barak Obama. I basically decided my vote on Barak's whining and fussing at the criticism he was getting from the Clintons. In my view if he can't take what other Democrats dish out how will he stand up to the Republicans? Well today Paul Krugman in the New York Times has essentially said the same thing:
The attacks from the Clinton campaign have been badminton compared with the hardball Republicans will play this fall. If the relatively mild rough and tumble of the Democratic fight has been enough to knock Mr. Obama off his pedestal, what hope did he ever have of staying on it through the general election?
It's always nice to know others have the same opinion, especially someone I admire as much as Krugman.
Posted by P M Prescott at 1:11 PM

I like the candle holder! Everyone needs and deserves validation from time to time.

Yes you do, thanks for coming by.

It is nice. Mom was fussing because when she and Dad retired they got Nambe ash trays. Kind of tells you how long ago that was.