Whew, glad they're over. This year our administration actually came up with a novel idea. Seniors who have less than 12 absences and end with an average in the 50%'s can still get their diploma if they finish out the school year and raise their grade to passing. They don't get to walk the line at graduation, but they can get their diploma without having to go to summer school. I had a student today with a 40's average that after the final was in the 50's and qualified. He was jumpin' up and down and more excited than those that pulled up to a passing grade and will get to walk the line. 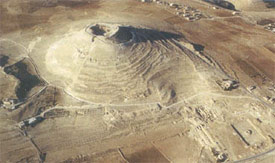 Found this at Bruce's blog. Hebrew University has discoverd Herod the Great's tomb. The man who Augustus joked about saying, "It would be better to be his swine than his son, because the swine have a chance of living." This may prove to be as big a find as King Tut's. 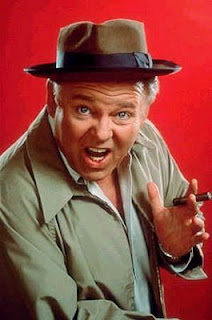 Political Rant
One historian said of Oliver Cromwell the "He was the most average Englishman who ever lived." When he came to power he ruled Britain with an Iron Calvinist Fist.
Napoleon was an average artillery commander placed in extraordinary circumstances. As Emperor of France he wasted armies as if they were petty cash until the troop account went bankrupt.
Hitler was an average Austrian WWI corporal. I'm sure he sat around drinking beer with all the other guys discussing how if they had been in charge they would have won the war. He became so puffed up with himself that he wrote a book on that premise, naturally blaming everyone else for the war's failure.
Now we have a President who in 2000 was described as the one candidate you could sit down and have a drink with just like any other guy in bar.
Here's to the Common Man -- look what happens when they get into power. It kind of reminds me of good old Archie Bunker. If you ever wondered what would have happened if Archie was President you no longer have to wonder. Bush could be an Archie Bunker Clone.
Maybe it's time to elect an uncommon man or woman to the job to clean up this mess.
Posted by P M Prescott at 7:47 PM