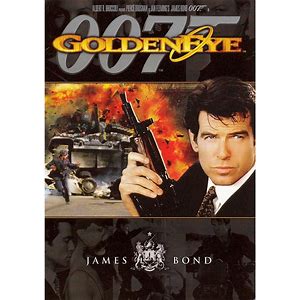 Berthold Gambrel has done a review of Goden Eye. You might want to read it before coming back to mine...

Growing up in the Sixties, Bond movies were as close to what would later be called an R rated movie. They were full of double entenderes, smart alec remarks, action and after From Russia With Love, nude silhouettes in the opening credits, not to mention Dominoe's black swimsuit with a sheer cutout cleavage in Thunderball. I wasn't that infatuated with Ursula Andress's bikini in Dr. No. She didn't compare to Annette Funicello in the Beach Blanket movies.

I also loved the henchmen. Odd Job in Gold Finger with his deadly top hat comes to mind, the gadgets and other things. It was a golden age of spy movies. The rip offs like In Like Flint or I Spy and The Man From U.N.C.L. E. on tv were also fun. Things haven't changed too much since then. It seemed like every week or every movie they're trying to keep a nuclear bomb from exploding. Now with The Sum of all Fears they actually explode, and the spy has to keep the politicians from Armageddon.

After, by far the worst, Bond movie ever made, A View to a Kill, ended Roger Moore in the role. The studio wanted Brosnan for the part, but he was on contract for his Remington Steele tv show. They settled on Timothy Dalton who was horribly miscast. He could look grim, look real while stuntmen did all the heavy lifting and failed miserably giving the punch lines. In License to Kill I wish when he set Sanchez on fire he was engulfed too. The only redeeming aspect of the movie was Cary Lowel running around in a loose bodysuit.

I was elated when Brosnan got the part as Bond for Golden Eye. He looked like James Bond, he had good running form, he was deft at giving clever lines. My wife's heart would beat faster in his love scenes and sometimes that translate over to me, except in Goden Eye.

It came at the end of the movie while they're talking around a campfire. The Bond car? The studio chose a BMW sports car. You see Q telling Bond about the gadgets and then at the end of the movie he drives to the beach and the CIA guy drives it away. At least Timothy Dalton's Bond car, a late model Astin-Martin, had a laser that burned through a police car separating it from the chassis.

Izabella Scorupco as Natalia was shrill and irritating. She screamed at Bond when they were tied up in a helicopter to wake him up, that was understandable. From then all she did was scold Bond and lectured him. There wasn't much to be romantic about.

Question, how did Natalia get from the destroyed Goden Eye complex to a city in a Russian winter on a dog sled wearing a skirt and light sweater?

Famke Jansen is one of my favorite Bond villains, squeezing men to death with her legs. The sparks and quips flew between Bond and Onatopp. Best parts of the movie.

The opening stunt. Bond bungy jumps from the top of a dam onto the secret complex. He meets up with another 00, Trevelyan, no idea how he got in, mayhem ensues, and he sets everything on fire. Bond flees jumping onto a fighter jet taking off over a cliff and you see the complex blow up. One big problem. No dam! Show the fireball to let the audience know the place blow up, a model of a building blowing up without a dam behind it ruins the suspension of disbelief. The entire opening stunt was bogus.

The chase scene through the center of town while he's in a tank, smashing through a truck full of cans of water and having a statue of a mounted knight fall off when he goes under a bridge was pure vintage Bond. After a few viewings over the years when all the cans start rolling around, where's the water?

A good ticking bomb trope as they're trying to escape being locked into a train let Bond use his laser pen to get them out, and a belt with a built-in escape wire comes in handy when earlier he was trapped in library.

Sean Bean as Trevelyan comes off as too overfriendly and cocky. Did he really escape the place exploding in the opening sequence with only a part of his face burned? Bond sums up what he's trying to do as only robbing a bank. True on a grand scale, but Golden Eye, basically a giant EMT device could be used to greater gain than this. The revenge angle was rather weak.

Okay, I'm done critiquing the movie. No Bond film is without it stretching the viewers suspension of disbelief to the max. Moonraker was by far the worst for this. Still every winter my wife and I do a Bond marathon either starting with the first going in order, or from last to first. It's a time capsule of technology through our 60+ years of life and something to do on cold winter days and nights around our electronic fireplace.

Good critique, and while I stand by my GoldenEye fandom, I admit many of your points are fair. Especially the observation about how Natalya could have made a journey across Siberia dressed like that. :D

We also agree about A View To A Kill. The only thing I liked about that movie was the opening song.