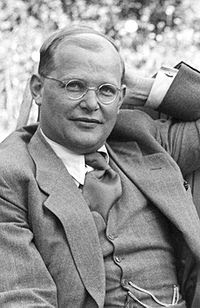 Scott Horton at his No Comment Blog. Has a six question interview with Eric Metaxas who has a new biography on Deitrich Bonhoffer (picture) entitled Bonhoffer, Pastor, Prophet, Martyr, Spy. Of all the theologians studied when I was at Wayland and later Seminary he was top of the list. When I was teaching on the unit of WWII I had my students choose a person from a long list and they had to do an oral report. Most of the students that chose the political leaders or generals went through the motions, but the ones who chose Bonhoffer were always affected and thanked me for having him on the list.
The first book of his I bought was a collection of his sermons No Rusty Swords. His thoughts resonate today as strongly as they did seventy and eighty years ago. Truly a worth man for a new biography and thanks to Horton and Metaxas for bring his name back into a generation that might have forgotten his thoughts and sacrifice in fighting against Hitler and the Nazi's. Other books by Bonhoffer: Cost of Discipleship and Letters From Prison.
Posted by P M Prescott at 9:33 AM