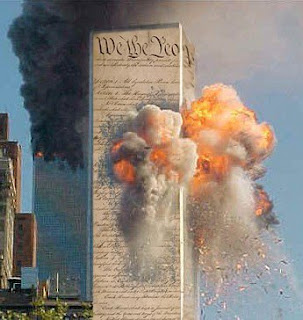 The worst part of being a history teacher is that you can see things coming and you feel like Casandra -- No matter how much you try to warn people what is going to happen, they won't listen!
Within a week of the attack on the World Trade Center, when Bush finally came out from the rock he was hiding under, I could tell he was going to use this disaster the same way Hitler used the burning of the Reichstag to disband the German Parliament and take over total power.
Six months later the American Patriot Act started the burning of the Constitution. No more need for Warrants, assassinate people you don't like -- that's called a Bill of Attainder -- expressly forbidden in the Constitution -- Forget Habeus Corpus -- call a press conference, announce you've captured a terrorist and lock him away for three years without charge, subject him to mental and physical abuse then convict him for leaving fingerprints on a piece of paper. Stalin at least made the innocent sign blank sheets of paper which would later hold their confessions before sending them to the Gulag. Arrest all your political opponents on trumped up charges so you never have to fear the outcome of an election. The polls are showing the American Public is fed up with the dog and pony show. Now if we can just get some backbone into the Democrats before more damage is done.
Posted by P M Prescott at 2:18 PM