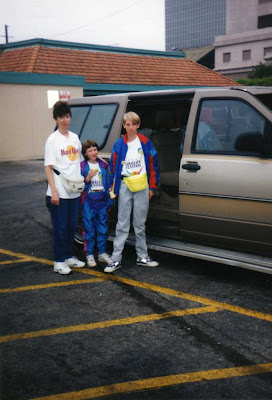 Grinnygranny and the kids on our trip to San Antonio.
My late father-in-law fell and hurt himself. They called and I went down. I couldn't talk my MIL into calling for an ambulance and all I had to take him to the hospital was the Ranger extended cab. The kids were also getting too big for them to ride in the drop seats. So we bought our first mini-van. It was a used '92 Ford Aerostar. A crazy thing happened. The dealership had a promotion that for buying a vehicle you got a free vacation. There were a few cities to choose from and we chose San Antonio. What started off as a nice family vacation over spring break turned into a family extravaganza. Mom and Dad decided they'd like to go with us in their RV. Penni and her family joined in. Bruce was living in Houston at the time and so was Penni's brother-in-law and his family. When everyone showed up we had seventeen trying to find a table at the Hard Rock Cafe on the River Walk.
The day we left it snowed and we dodged zero visibility all the way down to Ft. Stanton. From there we went to Fredricksburg. We stayed at KOA's on the drive. The so-called free vacation included a room at the Mariott River Walk, which was nice. Everyone else stayed at the KOA. For three days and two nights we toured the River Walk, a really great attraction, went to Sea World, walked through the Alamo. went up the space needle and over all had a fantastic time. Upon checking out having to pay for parking, the lodging tax and a couple of other expenses not covered by the company responsible for our "free vacation", it was just a little bit more than staying at the KOA. San Antonio has a really nice KOA, if you're into those kinds of accomodations. It had a movie room at night a barbeque pit for diiner, and a nice swimming pool. This was the first trip outside of NM we took as a family. We've been traveling fairly regularly ever since. If your traveling cross-country vans are the best way to go.

At White Sands National Monument. The kids are on the sands not the van.
The Aerostar had one major problem. A lousy transmission. Ford has an overdrive on their automatic transmissions. If your going up a steep hill or pulling something you use the drive otherwise you use O on the shift. Between 35 and 40 it would shift and down shift back and forth. Intown driving is pretty constant at that speed. We had the transmission completely rebuilt and it didn't fix the problem. Still with both our parents aging and the kids getting bigger we needed a van. Our next one was a green '96 Windstar. The passenger seats in the Windstar are a lot more comfortable than they were in the Aerostar. We would still be driving this one if not for one big problem. It had bad brakes. They had to be replaced at 24,000 miles and adjusted every time you did an oil change. Ford went on the cheap for an ABS system. They purposely had too little brake fluid, which kept the brakes from locking in a panic stop. 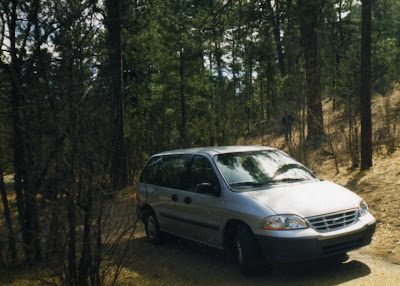 I was turned off by Ford. The last make of van I wanted was another Windstar and we were looking at a Chevy to replace it, but when we compared it with the newer version of the Windstar we chose a silver '99 version. Ford fixed the braking and transmission problems. We still have it and have put on over a hundred thousand miles on it. It's been down to San Antonio a couple of times while E was in basic training and tech school with the Air Force. We've taken it up to Nebraska to visit BIL and his family. Numerous trips to Oklahoma to vist E when he was stationed in Altus and up to see Bruce. The miles were really put on it when Autypesty took it to Canton as she was helping out Mom with Dad and Penni. It has the sweetest ride on the highway. Mom thinks of it as hers and has treatened us with death and destruction if we get rid of it.
We did look at replacing it with a Freestar, but Ford went brain dead by adding two thousand pounds making it way too sluggish and reduced gas mileage. Ford killed the Freestar and doesn't make a mini-van anymore.
Posted by P M Prescott at 7:52 PM

P M: I am thoroughly enjoying your fine series and reading your impressions, since I love cars!

Happy to ablidge. Problem is I'm running out of cars.