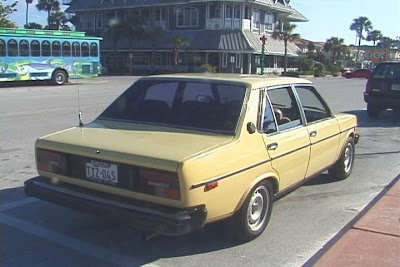 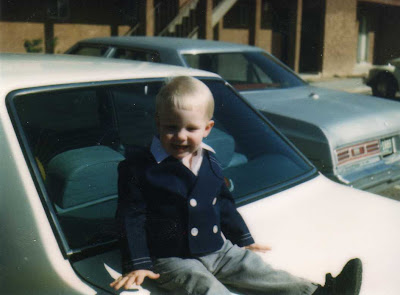 The Colt was actually Grinnygranny's car. I was riding around on a Honda Motorized bicycle, what they called at the time a Moped. It's top speed was 25 mph, but got around a hundred miles to the gallon. It got me to the university and back with the advantage of not having to find a parking space (scarce and espensive).

I was able to get around most of town using residential streets and only having to cross major ones and did my student teaching puttering around on the little machine. I'd chain it up on the metal ramp of the portable. The students nicknamed me Mr. Moped. The worst thing that happened to me on it was after a short rain storm I got drenched when a car passed me hitting a puddle.

In the fall of that year I substituted until November, and the little Moped got me around without too much trouble. I was hired on a short term contract to replace a teacher whose husband was tranferred out of country. At this point I needed a car.

I went to the credit union, found out how much I could afford, found a nice station wagon, signed the contract, filled it up on the way home on a Friday night. I got up Saturday morning and it was half empty when I turned it on. Getting under it I saw gasoline dripping from a hole in the tank. I drove it back to the dealer. They offered to pay half of the repair. I gave them their keys back. Monday I went to the credit union and canceled the sale.

I then found a much better car. A white 1980 Fiat Brava. It had plush vinyl seats a 2.0 ohc 4 cylinder engine that felt like a V8. I really liked this car. A week after I bought it the radiator blew. I took it back to the dealer, and they repaired it without charge. Finding a good dealer is soooo important.

The only problem with it was the fool who had it before me put spoke wheels on it. It drove fine until around 60 mph then the front end started vibrating. Which meant you couldn't take it out on the road, and this was a car that would have been sweet on the highway.
I did find a picture with E sitting on it when he was about two.
The next year I had my first full year of teaching at a middle school, and was hired as asst track coach at a high school. The first day I went down to coach I was sitting across from my car in the head coaches car in the faculty parking lot discussing my duties and watched a student turn too sharply and bashed in the driver side rear door. Naturally she didn't have insurance and the repair was under the deductable on my policy.
I didn't have the money to put regular wheels on it or fix the door, but all in all it was a fine car.
Posted by P M Prescott at 3:56 PM

P M: I'm picturing a Fiat Spyder in my mind with a body styled by Pinin Farina. They had a lot in common with my MGB GT. When they ran, they were nice. When they broke down, you were stuck. But I recall the dash boards had "Benzyne" for "Fuel". I am enjoying this great series! :)

That was the other problem with the car. Right after I bought it Fiat announced they were leaving the US market and the value of it dropped like a rock. I found a good mechanic here in town that specialized in Fiats so gettin it fixed wasn't a problem. The spider was a nice car.