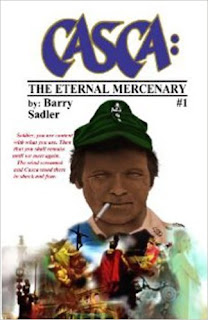 A long long time ago while teaching summer school the bookcase in the teacher's room had this book. I read it and was hooked. I bought and read all 22 books in the series before the author Barry Sadler died. He wrote the first four books and turned the others over to ghost writers.
Casca is the Roman soldier who stabbed Jesus on the cross. The gimmick used here is that Jesus curses Casca Rufio Longinus to never die until He comes again. This makes him immortal and he is a mercenary throughout the last two thousand years of warfare. From ancient Rome, the Vikings, Chin, the Mongols, to the present day. Each book takes you to a different part of the world and covers most of world history. There is meticulous detail concerning the commanders, strategy, tactics and weaponry on each battle.
Casca also has a group of radical monks who know about him and cause him grief. They cut off his hand and he's able to sew it back on and it works good as new. He dies a number of times in each book and no matter what he comes back to life.
When I was teaching middle schoolers I found girls didn't need much encouragement to read. All books written for this age group are designed for girls. The publishers for the most part won't accept a manuscript written for boys. A few exceptions are The Outsiders by S.E. Hinton and of course the Harry Potter franchise, but even those books are written by women.
It is really hard to get boys around the ages of 12 to 15 to read outside of what's required. This is called Alliteracy. I tried getting the boys to read a number of the books I liked at that age. Edgar Allan Poe was too hard vocabulary wise. Those rascals wouldn't go more than a few pages into Mickey Spillane. Then I hit pay dirt with Casca books.
I scoured all the used book stores in town picking up as many copies as I could get to put on the SSR book shelf and a number of the boys who boasted at the beginning of the year that they've never read a book, finished that year getting through two or three of them.
The beauty of Casca books in that they only take me around six hours to finish. For slower readers, like middle school boys it takes longer, but the light at the end of the tunnel is brighter.
After Barry Sadler's death the series stopped at 22. Over the years I picked up a couple of books on tape or CD at truck stops. I image they'd be popular with truckers. Eventually I downloaded all 22 books on tape to my computer and still enjoy listening to them at the gym while I'm trying to break a 20 minute mile on the treadmill. I used to run it in less than 4:30, those were the days. 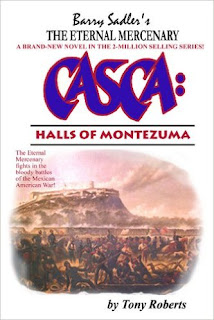 Then to my delight I found that another author, Tony Roberts,  has picked up the Sadler mantle and has started writing new ones. He follows the tried and true formula. His books pick up with volume 25, I don't know about 23 and 24. He's now into the 40's and thanks to Amazon Prime I've been able to read them on my trusty Kindle for free, just have to send them back when through.
For my faithful readers who would like a quick read in an historical setting, lots of fighting and tragic love stories to escape this world give Casca a try.

For more information about the whole Casca series go to the Wikipedia page.
Posted by P M Prescott at 11:22 AM 4 comments: