The New York Times had an article yesterday by Piers Brendon in reference to an article in the Washington Post by E.J. Dionne Jr. concerning a diatribe by Vice President Biden. Biden very eloquently defended the sustainable power of the U.S. against all the people predicting the collapse of the U.S.
It seems that the doom sayers are quoting Paul Kennedy's Rise and Fall of the Great Powers.
It's not often that one of these super duper books everyone is talking about is one I own, have read, even quoted on this blog. In fact I use an excerpt from this book in my US History class to explain why Britain had to grant us independence and our failure in Vietnam and our eventual failure in Iraq and Afghanistan.
Kennedy bases his assessment of the rise and fall of empires on economics. All empires eventually exceed the capacity of their economies to meet the greed of the leaders in expanding power. It's an insightful explanation of how Spain with all the gold and silver coming in from the New World became bankrupt in such a short time. He points out how England could not sustain an empire after exhausting it's economy with two world wars, but what caught my attention was how he placed England on the industrial power list and how it fit within it's natural resources.
Seen from the economic viewpoint he makes perfect sense and the figures do tell the tale in some instances, not all. If you take his logic to its ultimate conclusion the United States shortly will no longer be the world's largest economy. A fact many people are pointing out suddenly realizing that China and India are in the process of surpassing us. The fact that Bushco accelerated this situation by at least twenty years in their disastrous reign of stupidity seems lost on those blaming Obama for the situation, though he could do more to stop it. Japan after all is an exception to his equation. Japan has the population, but not the resources to an economic power, yet they manage it anyway. Adam Smith's Wealth of Nations seems to work well with them.
In short resources and population will win out in the end and it looks like the US will eventually become the third largest economy based on resources and population. Is this the end of the world? Only in our pride. Kennedy points out that in 1980 the life of the average Englishman was much better than that of an Englishman in 1900, but they didn't feel like it was because their empire no longer ruled the waves. Somehow better technology, health care, income and life expectancy aren't as important as believing you're better than everyone else.
Is that all Americans have to live for? The right to strut around and say We're Number One! We do that quite a bit at the Olympics. Why are our athletes the only ones who drape themselves in the flag when they win a medal? Maybe it was understandable in 2002, even 2006, but really doesn't this get a little old? Standing on the podium and being proud as the national anthem is played is plenty. Being wrapped up in the flag is to me (and I may be tarred and feathered for this) a little "in your face" to the other countries.
Biden is also responding particularly to the Christian Right with their Rapture theology that this country will be destroyed. Hell they think the whole world will soon be destroyed and blame it all on immorality. Why they're still fighting the fight against, shit I'm tired of writing out the list tof the things they're against you know them all by now anyway. They love to trot out the Roman Empire to prove their point. The point by the way that Brenden in his article is refuting.
Question: where are the barbarian masses waiting to invade us? Is this why fundies and repugs are so anti immigration particularly from Mexico? Are they wanting to bankrupt our economy so they (immigrants) don't have a reason to come here?
Is the U. S. really going to be invaded and overrun?
If there is an analogy between the U.S. and Rome it's not the analogy of 465, but more of the transition from the Roman Republic to the Roman Empire. From a representative government to a dictatorship. How long will it be now that the American Patriot Act has effectively negated the rights of the accused to knowing why they've been arrested and an attorney, destroyed the concept of privacy from warrant less search and seizure. When torture and legalized assassination accepted presidential power. How long before Congress becomes a rubber stamp politburo permanently like it was under Bush. How long before the president does everything like the Emperors of Rome and all we are left with is the illusion of democracy? Does it take a Republican stooge elected president by corporate advertising ordering his favorite horse be named a Senator before it hits us?
Posted by P M Prescott at 9:14 AM 2 comments:

And blogging about her exerience. I came down with stomach flu last night so M had to pick her up. She's staying with her for a few days to help her out.
I'm starting to get snow blind from watching all the skiing on the winter olympics. It has been a good year for team USA.
Posted by P M Prescott at 9:03 PM 2 comments:

Mom's scheduled to be released from rehab tomorrow. She'll have a rehab at home for a little bit. It's good to have her back on her feet.
Posted by P M Prescott at 9:10 PM 2 comments:

I received an e-mail from publish america. They will turn Optimus into an e-book for
$50. It's not the money here, I can easily afford this, but I get 8% off each book sold and e-books sell for $9.99. That means I would get $.80 on each book. I'd have to sell 60 e-books just to break even. Still debating if it's worth it.
Are there 60 people willing to pay ten buck for this book and read it on their computers?
Posted by P M Prescott at 8:27 PM 2 comments:

There are some things about teaching I will not miss.
Posted by P M Prescott at 9:22 AM No comments:

Mom went to rehab last night. She'll be there for a week. When I took her a few things today she was eating well, mostly because their food was a lot better than the hospitals.

Wife and I are getting ready to have an nice dinner for Valentines. Everyone else I hope you have a nice weekend too.
Posted by P M Prescott at 5:25 PM No comments:

When will Obama realize that a leader leads, he doesn't beg?
Posted by P M Prescott at 8:21 AM 4 comments:

Mom's having trouble again with the doctors not wanting to let her have her arthritis and neuroposy medications. Then they wonder why she is so difficult to deal with. Take away these medications and they might as well be trying to electrocute her. It looks like she'll be there for a few more days and then she'll be in rehab before they'll let her go home. They must be a glutton for punishment.


At Southwests Writers Saturday there was a photographer taking pictures of authors with their books. Here I am with Optimus and Friend's Forever. 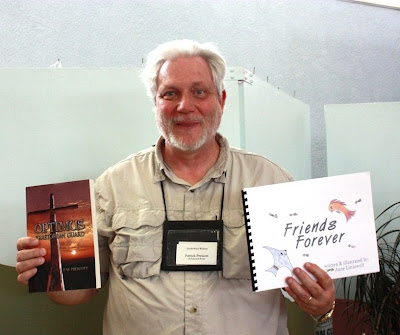 Mom's in the hospital with pneumonia. She was reluctant to go, but she'd been unable to lift her head off the bed for three days, hadn't eaten anything and drank very little. I spent most of Sunday night with her in the emergency room. After I came back to get a sub and leave lesson plans they finally found her a temporary room in what they call provisional care. She was finally put into a regular room last night. Auntypesty spent most of the day and evening with her while I caught up on sleep and had the Writers2Writers meeting last night. Mom's not too happy I made her go by ambulance, but when my father-in-law fell and hurt his back I transported him to the emergency room where they left him sitting with two crushed vertebrae for three hours because all their attention was focused on those coming in by ambulance. I learned two things that night: I could have severely injured him and no matter how much they may fuss about the cost of an ambulance use it.
Posted by P M Prescott at 8:50 AM 2 comments:

I found a link at Russ's blog out of Colorado that has some pretty interesting stuff. Including this article about Yak meat locally raised and sold.

I wonder if Anne would bring some when she visits here in early April?
Posted by P M Prescott at 8:15 AM 2 comments:

Paul Krugman made a statement on his blog that kind of tells the tale of what's happening today in our government.

The moral here is that right now the GOP literally has no ideas about how the nation should actually be governed.
And the scary thing is that lack of ideas seems to be a winning platform.

My question to ponder:

I wonder if anyone in the teaparty party has had the bright idea of placing Reagan in a glass coffin and putting him in a prominent place either in the capital building or White House?

Oops question:
Is bright idea and teaparty party an oxymoron?
Posted by P M Prescott at 7:46 AM 2 comments: Optimus will be turned into an e-book shortly. It will be for sale on the Sony reader and the new I-pad. Publish America is still fighting with Amazon and it's not available on the Kindle. Amazon's little problem with MacMillan over the weekend may change that issue. I'll keep you posted when they're available.
Posted by P M Prescott at 9:18 AM 4 comments: