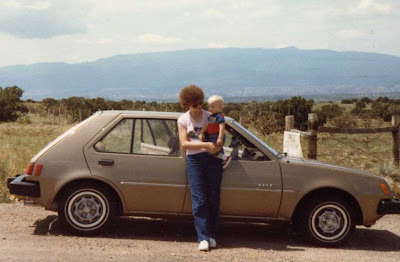 When Grinnygranny had been working a year where she still works 29 years later, and I'd just finished student teaching we felt it was time to trade in the Comet for a new car. I looked at a Chevy economy car and wasn't all that impressed. Then we found a 1982 Dodge Colt hatchback. It was built better and cost less than the Chevy. It had a peppy 4 cylinder engine with an automatic transmission and is the only car I've ever seen that had a lever next to the gear shifter. The lever had an E position and a P position. E for economy and P for power. Normally it was in the E position, but if you needed a little boost you could put it in the P position for more oomph. Living in an area with mountains it came in handy a time or two going up a steep grade, other than that it did fine in E.
One of the great pleasures, that with gas becoming so expensive may be dying, is the Sunday afternoon drive into the mountains. We have various routes we take for these drives. One of them is to go out Tijeras Canyon, turn at the (Sandia) Crest turn off, go through Cedar Crest, but instead of heading to the top of Sandia mountain continue on to Madrid and Golden. (Madrid is where John Travolta, Ray Liotta and others filmed the movie Wild Hogs). This picture was taken when E was around a year old. Grinnygranny grimaced when I showed it to her. It was her first curly perm.
Posted by P M Prescott at 4:22 PM

Reminds me of the AMC Pacer I once drove as a Blood Bank courier. I felt like Mike Myers in Waynes' World driving from hospital to hospital. But it was a well made vehicle. You see one every now and then here in Arizona where it is hot and very dry.

I haven't seen a Pacer or Gremlin in quite awhile around here. They were distinctive cars.

I owned an 82 Colt, in the same color. Best car I ever owned. Especially liked the P/E shift