I was driving the '69 Plymouth when Grinnygranny and I were married, she had a blue '76 Ford Maverick. A nice enough driving car, it had a V6 engine that was good on gas with plenty stop and go power. She'd had a '68 Mustang in high school, traded it in on a Vega (she still thinks that was the worst decision of her life and traded it in on the Maverick) and wanted to get a sports car again. We both liked the Camaro and started looking around for one. 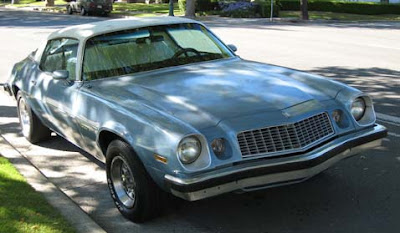 I gave the Plymouth to Penni we traded in the Maverick for a red with white top, '77 Camaro. It was the first car with my name on the title. When we bought it gas was selling for fifty cents a gallon. Within three months it jumped to a buck a gallon so trading in an economy car for a gas guzzler didn't seem so wise in hind sight. Even so this was the sweetest driving car I've ever owned. It had a 350 four barrel V8 that was pure power, and with it's wide stance it had the smoothest ride. You felt like you were floating down the highway. You did have to be careful on speed bumps and dirt roads as it didn't have much clearance.
The Pontiac Trans Am was much more popular because of the Smokey And The Bandit movie, but driving around like Jim Rockford wasn't that bad.
This was the one car I really hated parting with. When E was born we couldn't afford to make the payments on it and the hospital bill. 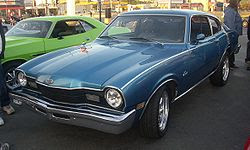 My father-in-law gave us his spare car, a '71 Mercury Comet. It had four doors and a fairly good sized trunk which was much more useful for putting all the stuff that you need to haul around small children.
My friend Russ at Private Buffoon, one of the old local blogging geezers that have been getting together to drink a  beer or two the last couple of months, posted this song on his blog and I just can't resist posting it here. It's really fun. Take a listen.
Posted by P M Prescott at 5:56 PM

P M: The Maverick is not forgotten on me. My best friend next door's Mom drove a candy apple red one. I kid you not, my first car note was for a used 77' Camaro that was silver--a 305 V-8. I drove it for 133,000 miles before electrical problems forced me to sell it. Fun memories!!!

They were a fun car. GM made a big mistake by downsizing it.