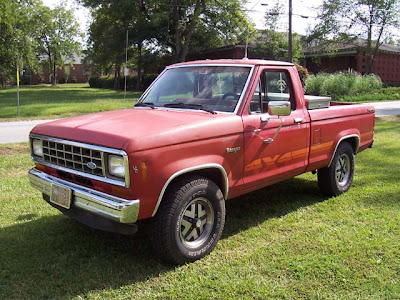 Over the last twenty years, I've had four Ford Ranger pickups. The first was a Canyon Red 1985 plain Jane. We bought a white camper shell. This was before seat belt laws. We found four real thick cushions, placed them in the bed and E would ride back there. He loved it. 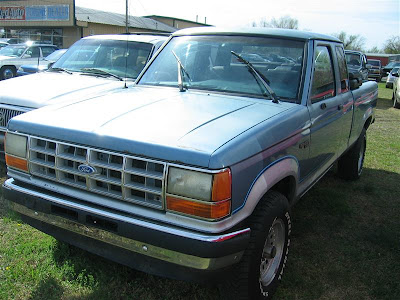 The next one was a 1990 light blue with silver trim (Dallas Cowboys colors) Six cylinder extended cab. It had standard transmission, but was so much easier to drive with air conditioning and power steering. The kids sat in the back drop seats. We bought a silver camper shell that made it look fantastic. 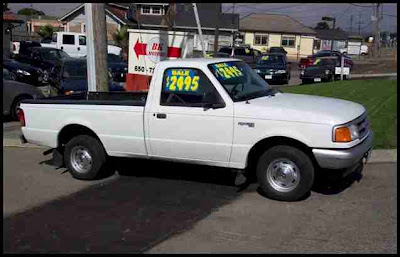 Grinnygranny drove them more than I did. She went through a phase where she liked trucks. While she was driving them I got stuck with a Honda Aero .125 motor scooter. I worked one mile from the school where I was teaching so I really didn't need much of a ride. I went through a series of clunkers until the kids got too big for the drop seats in the blue Ranger. We traded it in on our first van (which will be the subject of my next post). 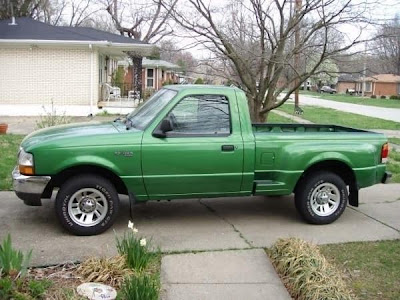 I finally got to pick out my own Ranger. I didn't choose wisely. The clunker I was driving lost it's heating so I found a 1996 white plain Jane. It wasn't until I'd driven it for a week I finally figured out there wasn't enough leg room. Which I couldn't figure out. The first Ranger had plenty of leg room, why didn't this one? It was a long bed, which cut off about four inches in the cab. I couldn't wait until I had enough equity in it to trade it in on my last Ranger. I picked out a 1999 Jalepeno Green regular cab with air conditioning, power steering, but it still had a standard transmission. The only problem was that I bought it in June and in August transferred schools from across town to two blocks from home. I was back to not needing a vehicle.
Posted by P M Prescott at 9:00 PM

Wow! A very nice collection of vehicles, P M! I never owned a truck. The closest I ever got to owning one was a 1980 El Camino, pearl white with mags. I was almost done restoring it when I was rear ended at 40 mph at a stop light. It had a bench seat and had that familiar smell associated with GM's with over 100K miles on the odometer. A nice vehicle! I love the Jalapeno Green pickup. Classy!!!

It was an interesting color. Looked really good on the Mustang.
They were nice transportation.