The top ten extraordinary book titles.
The following by Harlan Ellison, most are short stories 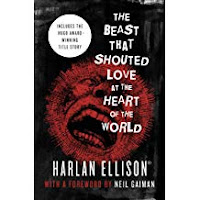 The Stainless Steel Rat by Harry Harrison.  A whole series of books.

You have such good taste in books. :)

Thanks for the compliment, lydia.

Ooh, I love the title Shatterday!

Years ago there was a revival of Twilight Zone. The first episode was Shatterday starring Bruce Willis. Harlan Ellison was executive producer of the series. It didn't last long.