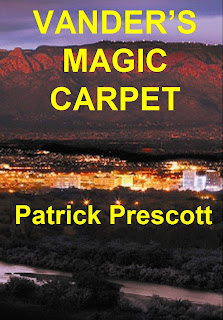 Way back in 1989 on a 286 pc without a hard drive using Bank Street Writer I wrote my first novel over the summer. It was for Ted Turner's Tomorrow awards. The story had to deal with a positive future. I didn' win.
Strangely I kept the story through all the different incarnations of computers and when I started e-publishing last March I dusted it off and have been editing this story. Today I pubished it at Smashwords.com and Amazon.com

Plot:
Eugene Vanders is an electircal engeneering professor at UNM. He's living a comfortable life with wife and daughter. A student tells the police he's a drug dealer and they raid his house. The new police chief trying to avoid law suits and bad publicity has a standing order that all drug raids produce drugs. They plant cocain in Vander's garage and he is arrested.
While in prison his wife is murdered and daughter commits suicide. Vanders swears that those responsible will pay.
He develops silicon discs that can make anything placed on them fly. The first real magic carpet. He fights with corporations and government to market his invention and revolutionize transportation while getting even with those who set him up. He's torn between seeking revenge and giving forgiveness to rebuild his life with a new wife and step-son.
This story deals with the abuses and problems with our war on drugs which is just as pertinent today as it was twenty years ago. It also is about how difficult it is to market new transportation technology while fighting oil companies, automobile corporations and government regulations. It's positive message is that this technology is possible and it will become reality.
Posted by P M Prescott at 1:12 PM

P M: Quite an interesting balancing act, given this thoughtful plot. I admire your tenacity with the drastic changes brought upon the publishing world. I haven't completed my book outline yet. A toast to you for forging ahead--always!

It sounds like a wild story. I'm going to try it.

Michael, no time like the present to publish today. It is so easy.