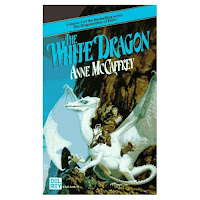 Anne McCaffrey left us on November 23, 2011 at age 85.
When I started to read prolifically in junior high school like most boys at that time who grew up on Saturday afternoons watching Science Fiction Thriller movies. I was natural I'd start reading sf. Isaac Asimov, Rober Heinlien, Poul Anderson, Harlan Ellison, Andre Norton and Anne McCaffrey.
She wrote hard scienc fiction like her Crystal Singer series and Ship Who Sang then incoroporated it into fantasy with her Dragon rider stories. In 1986 she was one of the few writers in this genre that hit it big on the New York Times best seller list with the third book in her Dragon Riders series: The White Dragon.
I read the novella that was later turned into the first novel: Dragon Flight in an anthology of Hugo Award Winning Stories. (Hugo's are the top awards for sf & fantasy) What was fascinating about the dragons in her stories is they imprint and are linked telepathically to their riders. This makes the dragons equal characters with their riders. It is a total bafflement to me and I'm sure many of her fans why none of her stories have been turned into film. CG technology has been up to the task for at least ten years and I've seen numerous movies with lesser dragons than and stories than hers.
I joined the Science Fiction and Fantasy Book Club and picked up about six books a year for nearly ten years through them. I dropped the club in the mid 80's because they stopped having books that were sf being mostly sword and sorcery. I fell in love with her Fire Lizards. A subset of the planet Pern where these stories are set in the Harper Hall books dealing with a young haper (singer) named Mennoly who imprints a clutch of fire lizards. After I read the first of these books Dragon Singer I gave it to Penni, who was in high school at the time, and the first thing she said after reading it was, "I want a fire lizard."
When I married decades ago I read all these stories to my wife. Reading to each other helps keep us close. The Crystal Singer stories with Killashandra Rhee were her favorites.
Notice how singing is so integral to her stories? It's not often any writer adds the importance of music to their make believe worlds.
Teaching 7th grade English I aquired a classroom set of Dragon Flight, and not all the students liked it, but I'm hoping I made a few of them Dragon fans.
Posted by P M Prescott at 8:07 AM

I once worked with an aging curmudgeon who once said to me, "Any death is untimely". This sounds like someone who inspired you, P M. I'm sorry to learn of her passing.

She inspired an entire generation of sci-fi fantasy readers.