Instead of judging a book by it's cover First line Friday is when you:
Pick a book. Copy the first lines of the book. write a synopsis. Then show the cover.
“Battering ram! Don’t fail me now!” Optimus raised his fist punching the wall above his head. The girl beside him stroked his broad shoulders kissing him passionately. There was no response.


In frustration he looked at the woman it took a night’s gambling to bed: pale blonde hair—real blonde, not dyed. Like spider silk when he followed it with his hands all the way down to the middle of her back. Eyes the brightest blue he’s ever seen, with arching eyebrows, the kind of eyes that a man could look at for an eternity. Skin almost translucent, the palest white; a small button nose and red thin lips. Truly this was a face that could cause wars. Why do my loins refuse to be stirred?


Optimus is a hard drinking, fast living Praetorian Guard. Ordered to execute someone he loved by Emperor Nero, he goes on a six week bender. His commanding officer assigns him guard duty so he can dry out. The man he is assigned to guard is an old tent maker from Judea named Paul.


At first he’s angry at the assignment as it’s beneath his station, but as he sobers up he dreams of strangling Tribune Cornelius because the man he’s forced to stay with under house arrest never shuts up. He’s always dictating a letter to his scribe and physician, Luke. Or Luke is reading to Paul letters that arrive from all over the empire.


Gradually the words of Paul start making sense to Optimus and he examines his life. 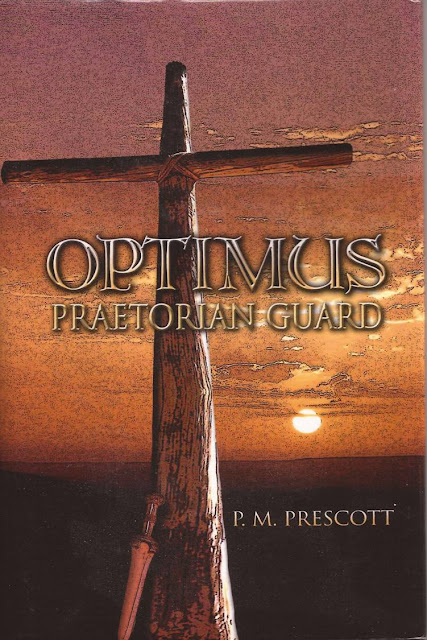 I really loved that book.

Glad you did. I'll finally have the sequel: Stephanus out sometime next month.